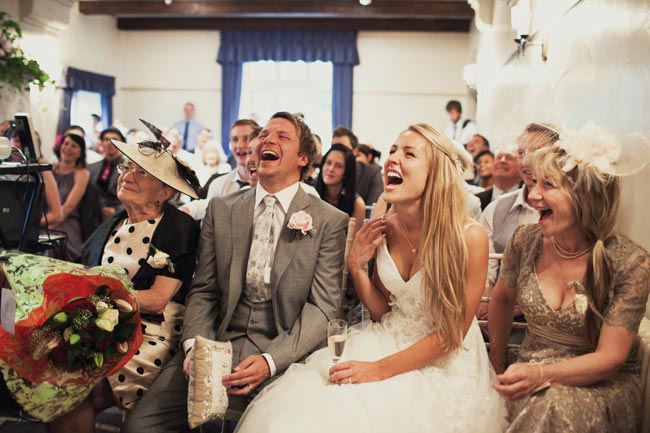 If you’re close to the bride or groom and know them to have a good sense of humour, then a funny wedding card message may be the perfect antidote to the usual boring and cliche’d sayings that they will be receiving from everyone else. Coming up with something witty and clever, or using an in-joke that you’ve had with the couple for a long time can make your card stand out from the crowd and show you’ve taken the time to think of something more meaningful than the usual wedding wishes.

Putting a smile on the newly wed couples face or giving them a laugh can be extremely rewarding, and using some of the funny wedding card messages we’ve provided below, either directly or as a basis for your own message, will help to make the day extra special.

Warning! If you’re unsure if something funny or amusing is suitable for the couple you’re sending your card to, don’t risk it. The last thing you want is them reacting badly or thinking it inappropriate.

All weddings are happy. It’s living together afterwards that’s difficult!

Trip over love, you can get up. Fall in love and you’ll fall forever.

Marriage doesn’t mean you own the person (just all their stuff).

Keep calm and don’t do it!

The secret of a happy marriage remains a secret.

Whatever you may look like, marry a man your own age – as your beauty fades, so will his eyesight.

You will have moments when you really love each other, then there will be the rest of the time.

Marriage is a sort of friendship recognised by the police.

They say that marriage is a great institution.

And much like many types of institutions, you need to be crazy to get into it.

Before you got married, you were madly in love with each other. Now you will’be be mad at each other as well.

Marriage lets you annoy one special person for the rest of your life.

Marriage means commitment. Of course, so does insanity.

Some future advice for the Groom: the most effective way to remember your wedding anniversary is to forget it… once!

Marriage is the process of finding out what form of person your spouse would have really preferred.

Congratulations for embarking on life’s journey called marriage.. which is either a two way street between compromise and sacrifice
Or a one way street to divorce!

Couples get a big surprise after getting married because they fail to figure out life’s biggest mystery – when two become one, halved is the fun.

Look, I know a good travel agent if either of you changes your mind. If not, have a wonderful wedding!

I’m happy that you are getting married, but does that mean I have to buy two birthday gifts every year instead of one?

The only difference between marriage and stupidity is that marriage is expensive while stupidity comes free of cost.

I know I am going to have an awesome time attending your wedding because I will be reminded of all the money I will be saving by not getting married. Congratulations.

I cancelled all my appointments and an important meeting just so that I could make it to your wedding. After all, free food and booze was just too lucrative to give up. Congratulations.

Knowing the entrepreneurial couple that you are, I was wondering if you could give me some insider tips so I can place my bets on how long you both will last? Congratulations for getting hitched.

Congratulations – you just paid for a whole bunch of your friends and family to have the biggest party of their lives.

You’ve finally found someone who understands your weird jokes. Hold onto them forever!”

These hilarious sayings perfectly sum up marriage and weddings and all they entail. Any one of them should be a great fit for your wedding card,

When two hearts love each other, don’t forget the prenuptial.

Getting married is a two-way street – do all you can to avoid head-on collisions.

Getting married is like a class on Shakespeare. You get a little comedy, some romance and a lot of tragedy. Congratulations.

A person is incomplete without a spouse, but you’re finished with one. Enjoy married life!

Marriage: Where “Yes Dear” are the magic words.

If it weren’t for marriages, men and women would have to fight with total strangers.

A blind wife and a deaf husband make for an ideal couple.

My wedding gift to you is two life preservers.

A great addition to a wedding card or speech are some funny quotes said by others. Some of the most famous comedians, film stars, authors and more have made hilarious comments about getting married. So take advantage of their words and use them as a funny wedding message or to get some laughs in your speech.

“Spend a few minutes a day really listening to your spouse. No matter how stupid his problems sound to you.” – Megan Mullally

“Marriage has no guarantees. If that’s what you’re looking for, go live with a car battery.” – Emma Bombeck

“Marriage is like a game of chess. Except the board is flowing water, the pieces are made of smoke and no move you make will have any effect on the outcome.” -Jerry Seinfeld

“A man is incomplete until he is married. After that, he is finished.” – Zsa Zsa Gabor

“My wife, Mary, and I have been married for forty-seven years, and not once have we had an argument serious enough to consider divorce; murder, yes, but divorce, never.” – Jack Benny

“Love seems the swiftest but it is the slowest of all growths. No man or woman really knows what perfect love is until they have been married a quarter of a century.” – Mark Twain

“My wife dresses to kill, she cooks the same way.” – Henry Youngman

“Marriage is a wonderful invention: then again, so is the bicycle repair kit.” – Billy Connolly

Your kids grow up and move out. Your husband never does. Just sayin’. Best wishes on your marriage.

“What’s the best way to have your husband remember your anniversary? Get married on his birthday”

“Why are wives more dangerous than the Mafia? The mafia wants either your money or life… Wives want both!”

What do fun with the boys, out on the town and partying have in common. Three things you won’t be doing after the wedding. Good luck.

“Spending time with friends” will now be a distant memory.

From single to married, from available to busy, from no worries to no money — You sure you want to do this?

Recent Posts
Support Us
If you'd like to support us and what we do, and your planning on buying any wedding gifts or related items (or buying anything!) then if you click this link to Amazon Wedding Card Message gets a small amount back with no cost to yourself. Simple as that! Thanks!
© 2020 - Weddingcardmessage.com
This site uses cookies More info